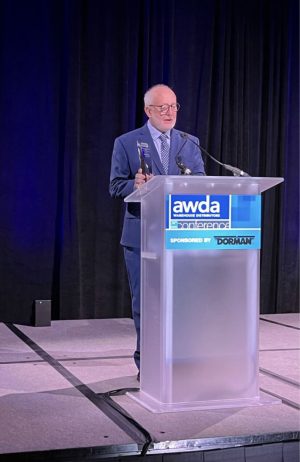 AWDA’s Lifetime Achievement Award recognizes individuals who have, over the course of many years, distinguished themselves through their unselfish commitment to, and high level of performance within, the motor vehicle aftermarket industry. The award is named in honor of former AWDA President, Martin Fromm.

With more than 50 years of service to the aftermarket, Richard Beirne has been an active and well-respected industry advocate, applying his leadership skills to some of the industry’s most impactful decisions of the 21st century.

Beirne started his career in 1968 as a delivery driver for United Auto Supply (UAS). After working in every aspect of the business, he was named president and CEO in 1989. Beirne continued in that role until UAS was acquired by APH in 2015.

During his tenure with UAS, Beirne served on the executive board of Federated Auto Parts, including a term as chairman. He joined the AWDA Board of Governors in 1996 and served as chairman in 2004. He continued to serve the AWDA as treasurer and eventually treasurer emeritus.

AWDA’s Executive Director, Larry Northup said, “Dick Beirne was the first Chairman I worked with after being named Liaison to AWDA in 2004. He set the stage for the durable and interdependent relationship that exists today between AWDA and the Auto Care Association. Throughout all those many years, Dick has remained one of my most valued advisors; an incredibly wise and thoughtful man that everyone should listen to and seek to emulate. He truly is a ‘backbone’ of the aftermarket industry.”

Beirne’s leadership and integrity have been recognized often. Among his many awards, he received the 2004 Art Fisher Memorial Scholarship Award from AWDA for his support of training and education and in 2007, Federated Auto Parts presented him with their Art Fisher Memorial Membership Award. In 2011, Beirne earned AWDA’s Pursuit of Excellence Award.

APH President and CEO, Corey Bartlett says of Beirne, “Dick is the epitome of unselfish, and the personification of integrity — we are delighted to have him as a member of our team, and more importantly, as a leader in our industry. He recognizes the successes of colleagues and competitors alike and most critically; he leads by example. I know that Dick’s ongoing efforts will continue to positively impact the industry for decades to come…which is why he is so deserving of this Lifetime Achievement award. Congrats, Richard!”